Jenny is a 70 year old woman diagnosed with stage three ovarian cancer in 2018.  She is a retired business owner with almost no assets and lives off of $1,217 a month in Social Security retirement benefits.  She selected her Medicare Advantage Plan when she turned 65, was healthy and had business income.  The plan carries an annual maximum out of pocket cost of $5,900 – which while affordable at the time she enrolled in her plan, is now nearly half her annual income.

Since she is a low income Medicare recipient, we were able to enroll Jenny in a Medicare Savings Program called Specified Low Income Medicare Beneficiary.  This program will pay her Medicare Part B premiums of $135.50 a month, saving her $1,626 in 2019.  We were also able to enroll her in the Medicare Extra Help program, which will help her pay the costs related to her Medicare Part D prescription drug program. Given Jenny’s planned course of treatment including very expensive oral medications for multiyear maintenance, the Extra Help program will save Jenny over $11,000 a year.  Additionally, we were able to locate an open foundation co-pay assistance fund for ovarian cancer patients for which Jenny was eligible.  We enrolled her in the fund, which will cover up to $3,500 a year for her chemotherapy and related costs, and will count toward her health plan’s maximum out of pocket of $5,900.  Prior to our work with her, Jenny had never heard of any of these programs and had no idea she was eligible for them.

The last piece in our strategy to make Jenny’s health care affordable for her is to help her switch to a Medicare Advantage Plan with a much lower annual maximum out of pocket cost.  Although it is not time for open enrollment, her enrollment in the Extra Help program triggers a special enrollment period, allowing her to switch plans now.  We will refer her to a Medicare broker to determine which is the best plan for her, but she is eligible for several plans with max out of pocket costs of $3,000 - $4,500, saving her an additional $1,400 - $2,900 in 2019.

When we met Jenny, she was looking at medical costs (including Part B premiums, prescription drug costs and her maximum out of pocket which she will hit) in 2019 of over $18,000.  That’s 125% of her entire annual income just for the cost of treating her cancer. As a retiree scraping by on Social Security retirement as her only income, she absolutely would not have been able to afford her cancer treatment.  Our work with her (so far) will save her over $16,000, bringing lifesaving medical care within her financial reach.

Gloria is 56 years old and was recently diagnosed with Stage IIB ovarian cancer. She had surgery in October 2019 and was just starting her chemotherapy regimen when we met her. While Gloria had previously been employed and was able to make ends meet, after her diagnosis she found herself unable to work because her job working with children is too dangerous for a person who is immunosuppressed from chemotherapy treatments. When we met her she was on unpaid leave with no income at all, and a private insurance policy with a maximum out of pocket of $6650. Gloria is enrolled in the insurance plan offered by her employer, and unfortunately there is no better option for her to reduce her out of pocket expenses.

Our advocate let Gloria know that she may be eligible to receive social security disability benefits and educated Gloria on how the process works. She continues to work with Gloria and will assist if and when Gloria decides to apply.

Gloria's Carol's Wish advocate is also assisting Gloria with submitting applications for community grants that will help her get through her immediate financial crisis, and continues to work with Gloria to ensure she is able to afford the treatment she needs to get better. 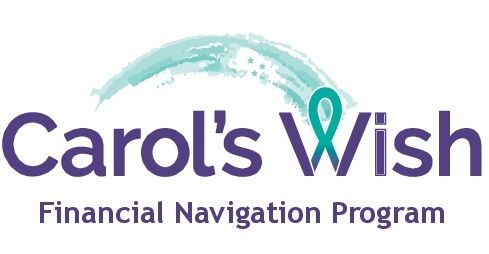