Did you know that Lesbian and Bisexual women are at greater risk for developing ovarian cancer than the general population of women? 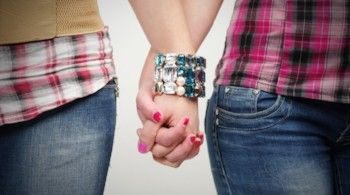 Know the Symptoms of Ovarian Cancer

Historically ovarian cancer was called the “silent killer” because symptoms are vague and the disease is often not discovered until the late stages. However, studies have shown that the following symptoms are much more likely to occur in women with ovarian cancer than women in the general population. So, paying attention to recurring symptoms could help catch ovarian cancer it an earlier stage and increase the chance of survival.

The most common symptoms ovarian cancer include:

You can learn more about the symptoms of ovarian cancer in another section of this website: SYMPTOMS

It can be beneficial to KEEP TRACK of your symptoms to gather information about how severe and frequent your symptoms are. Then you can share that information with your doctor. Below is a link to a Symptom Tracking Diary.

What if you DO have symptoms?

If you experience even one of the symptoms listed above for more than 17 days in any given month, please reach out to your doctor (preferably a gynecologist) and ask for:

And take your symptom tracking diary with you!

How to better control the risk of developing ovarian cancer - for EVERY woman!

As mentioned above, lesbians and bisexual women are at greater risk for developing ovarian cancer than the general population of women because lesbian women likely do not take contraception, may be overweight, and may ignore routine health check ups.

We want you to know about other risk factors as well:

Barriers to medical care for lesbians and bisexual women

Studies have found that lesbians and bisexual women get less routine health care than other women, including colon, breast, and cervical cancer screening tests.

Some of the reasons for this include:

There are many lesbian, gay, bisexual, and transgender/transsexual (LGBT)-friendly providers. An LGBT community center or group may be able to refer you to one of these providers. Don’t give up – find the respectful care you deserve!

Other information and resources:

For more information on ovarian cancer, the Colorado Ovarian Cancer Alliance provides a resource guide for both local and online resources. You can access and online copy here: RESOURCE GUIDE

In addition, the following websites provide good information with regard to ovarian cancer and the lesbian and bisexual community:

The Colorado Ovarian Cancer Alliance is dedicated to helping ALL women become more aware of the risk factors and symptoms of ovarian cancer and to providing programs that serve women who have the disease.

Please reach out to us for help and information.

We care about you!